Vercingetorix was born the son of Celtillus the Arvernian, a Gallic tribal leader. Accounts of Celtillus are conflicting, however, according to Caesar he was put for death for attempting to consolidate all the tribes of Gaul. While he failed, he would certainly serve as an inspiration to his son who would envision a Gaul returning to it’s Celtic roots, free of Germanic raiders and Roman rulers.

Little is known about the life of Vercingetorix prior to his role as a tribal chief. Vercingetorix was likely not his given name but a title later given in life that roughly translates to Warrior King.

Vercingetorix lived his entire life watching the Celtic way of life being eroded by enforcement of Roman laws and customs. In 51 BC, after an embarrassing revolt (lead by Ambiorix, who we will cover later in the series) Caesar lashed out against the Eburones Tribe by burning all the buildings on their land and slaughtering the inhabitants.

This was the final straw for Vercingetorix, something had to be done.

Seeing other revolts in the region, Vercingetorix approached the tribal council of elders seeking an army to attack Caesar and his forces. For this, as Caesar notes, he was cast out of Gergovia. However, Vercingetorix did not give up. He spoke to beggars, outcasts, and commoners. From this came a smalll guerilla army.

Vercingetorix began raiding not only Caesar’s lands in Gaul but the lands of Gallic tribes that had aligned themselves with Caesar. With every raid Vercingetorix distributed weapons and food to the Celtic people. Soon Vercingetorix had the support of the entirety of Gaul.

Upon hearing this Caesar returned to Gaul with his personal army determined to put down the rebellion. Vercingetorix employing scorched Earth tactics made Caesar entirely dependent on his supply lines. However, the Celtic people were unwilling to burn down the city of Avaricum. Vercingetorix took his forces and camped nearby in order to respond should Caesar attack the city.

When Caesar eventually caught up to Vercingetorix he immediately laid siege to Avaricum, which according to Caesar was extremely heavily fortified. When Caesar’s forces entered the city they slaughtered an estimated 40,000 inhabitants. When word of the atrocity spread Vercingetorix gained more support and warriors than ever before.

Caesar grew tired of being outmaneuvered by Vercingetorix and enlisted the support of Germanic mercenary horsemen. Vercingetorix was taken by surprise and was chased into the city of Alesia, where he was cornered with his forces. Caesar laid siege to the city. Vercingetorix dispatched men on horseback to break through the Roman lines and get reinforcements.

Vercingetorix’s cousin, Vercassivellaunus, arrived with reinforcements and attacked Caesar’s forces from behind; though anticipating this Caesar had already built defenses behind his forces. Vercingetorix then ordered his men out of their fortifications to attack from the front.

Only when Caesar himself entered the battle with his last reserve units were the Romans able to repel Vercingetorix and enter the city. 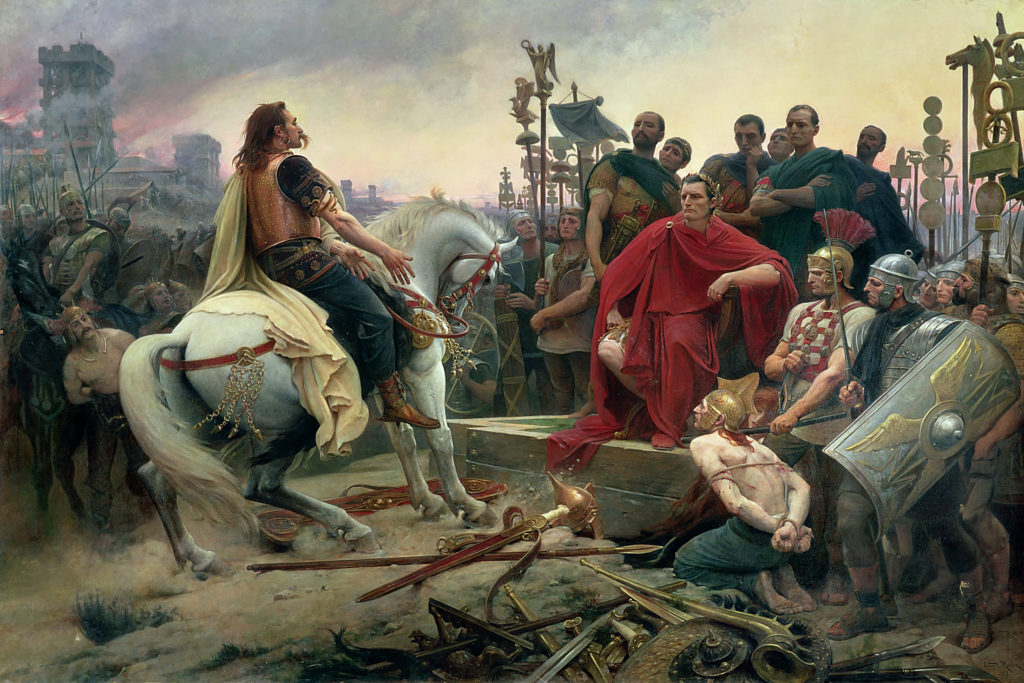 Knowing that the battle was lost Vercingetorix turned himself in. Accounts vary on the details but it’s said that Vercingetorix threw down his sword and offered his life in exchange for the lives of those who inhabited Alesia.

Vercingetorix was kept in Tullianum for 6-7 years before he was paraded around the streets of Rome then was ritually strangled or beheaded at Temple of Jupiter Optimus Maximus.

As stated in the introduction to the Sinnser Adora series, the purpose of these articles is to connect to an indigenous history of resistance. Vercingetorix is the perfect invocation for an working class, anti-white, indigenous rooted, Neo-Celtic anti-imperialist struggle.

Vercingetorix proved time and time again to be a hero of the people of Gaul. When cast out of Gergovia, he appealed to the common man when other Celtic leaders were too afraid or, as it’s been speculated, were vying for power in a future Roman Empire. In the words of Caesar Vercingetorix compelled the common man to “take up arms for the sake of general liberty.”

When Caesar attacked Gergovia Vercingetorix defeated Caesar and chased down his forces inflicting further casualties; displaying that not only was Vercingetorix skilled in guerilla warfare but conventional war as well.

In 1865, Napoleon III commissioned a 23 foot tall bronze statue of Vercingetorix on what is thought to be the location of Alesia.